Festivals are often a case of Man (or Woman) vs. Nature.  You’re typically out in the elements like the heat or the rain and braving it out in order to see some of your favorite acts.  Sloss Music & Arts Festival found itself in a situation where it was having an epic battle with nature over July 13th and 14th in Birmingham, Alabama.

In its fourth year, Sloss has slowly built a great reputation as one of the bigger mid-tier festivals in the Deep South.  Having hosted big names like Modest Mouse, Alabama Shakes, Death Cab For Cutie, and Cage the Elephant, Sloss slowly became a destination event for much of Alabama and surrounding states. 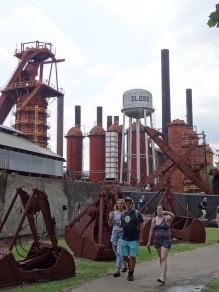 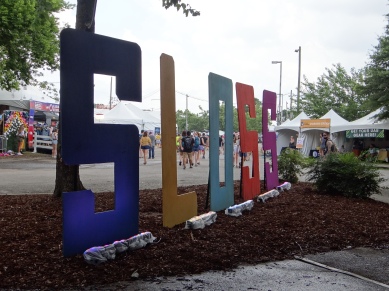 Part of Sloss’s transformation from steel mill to festival grounds.

2018 would promise to be a big year as it booked the biggest name yet in Arcade Fire, a multi-Grammy winning band who has commanded much larger festival crowds at Lollapalooza, Coachella and Bonnaroo.  The AC Entertainment and Live Nation backed festival looked to make a big jump this year, and faced a huge hurdle in the form of summer storms in order to make it happen.

The weather would prove to be a big foe in 2018, but it did allow for some signature sets that we were able to see.  *repeat repeat is a big rising star on the festival scene, and made a huge splash with their variety of modern pop-punk that features both a West Coast surfer flavor and Nashville sound.  They took to one of the main stages right before the first weather delay, packing a ton of energy into an abbreviated set that quickly won the crowd over. 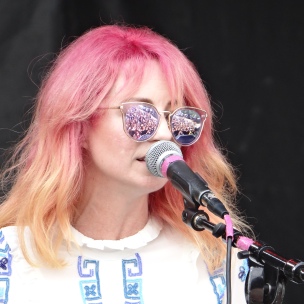 Husband and wife team Jared and Kristyn bulleted to the stage, with Jared proudly wearing his newly acquired truck stop weed hat as they rushed into their sped-up cut “Plugged In” from their recent Floral Canyon album.  After going through a few similar high energy songs, Jared gossiped with the crowd and bragged that the band would soon be going into the studio to record their next album with some of the guys behind The Black Keys in Nashville.

The announcement that the crowd would have to take cover under the nearby bridge came just as *repeat repeat finished part of their set, in which the festival was delayed for a few hours.  Confusion was rampant amongst the crowd as a lot of miscommunication was in the air, but music would resume later in the evening after the loss of a few acts as a result.

Just as fans were allowed back in, modern southern rockers Moon Taxi took to the other main stage.  Frontman Trevor Terndrup mixed up tales of Birmingham playing part of the history of the band along with a lot of high energy to really get the festival back into gear after the weather delay. 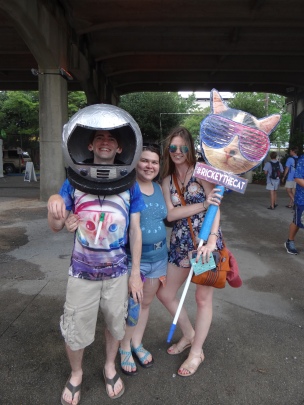 Sloss fans posing with our #RickeyTheCat totem after the weather delay.

Trevor of Moon Taxi hyping the crowd back up after the weather delay.

Around halfway into one of their songs, Trevor paused to plead with a security guard to not use his garden hose to spray the crowd, imploring “we’ve all gotten wet enough!”  The crowd responded with a big approving yell, and the energy never quite died down for the rest of their set.  As confetti blasted and rained onto the crowd during their last song, Sloss was finally back in gear.

After heated festival sets from 21 Savage and local Alabama boy done good Jason Isbell, things really ramped up with arguably the biggest headliner in the history of SlossFest, Arcade Fire.  From the beginning of their set, it was clearly evident that the Canadian band was amping up the stage production value in a big way.  Giant LED boards and a disco ball were added to the stage, throwing in a ton of appropriate visuals to the dance heavy indie rock that the band has become famous for in recent years.

Arcade Fire utilized every second of their hour and a half setlist, mixing in both hits and deep cuts from their fifteen years of history.   A huge highlight was “Sprawl II” where multi-talented frontwoman Régine Chassagne orchestrated both the band and the lights through the jumping cut from their hit album The Suburbs.  Married stage duos seemed to be a theme for the day, as Régine’s husband Win Butler also led the band through an audio history of the band, going from their first album Funeral, all the way to their recent release of Everything Now.  Of course, the night ended with their singalong of “Wake Up,” which seemed to bring a joyful catharsis from a crowd who’d endured the long delay earlier in the day.

SlossFest would also endure some of the same weather related pains the next day on Sunday that we did not attend, but we were encouraged to learn that they’d improved things a bit as a PA system was provided to supply singalong songs and more prompt announcements.  Though many more acts would be lost, festival organizers still managed to cram in the few remaining ones that time would allow for.

While the unavoidable weather proved problematic and communications between organizers and attendees were a struggle, SlossFest still managed to salvage a positive festival experience when the weather cooperated.  We trust that the team of Red Mountain Entertainment and AC Entertainment will be able to learn valuable lessons from the problems they encountered in 2018 to continue to make SlossFest Alabama’s best home-grown festival. 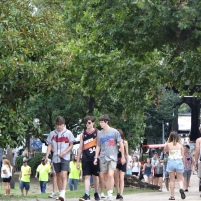