Daniel is a ten year veteran of the Marketing and Communications industry, having earned his Bachelor’s of Arts Degree at The University of Alabama in Huntsville and served as the marketing official for universities and tech companies alike.

He is also a contributor to Geek Out Huntsville, an online publication covering the Huntsville, Alabama market.  He has also worked in the music industry, having previously been the owner and operator of Dirrty Apple Records and managed Indie Folk band Ashlyn Maine. 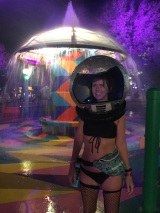 Sharla is also an experienced Marketing and Communications professional, earning her degree at The University of North Alabama.

She has handled communications and outreach in the tourism industry for a decade, and has owned her own business as well.  Daniel and Sharla have also been married since 2007, and aside from attending music festivals, love traveling the world!

Chelsey is a recent graduate of the University of Alabama in Huntsville, having earned her Bachelor’s of Arts Degree in Photography.

She is the owner of Rays of Light Photography, offering wedding and portrait services throughout the North Alabama area and beyond.  Chelsey is also the former vocalist for Indie Folk band Ashlyn Maine.

Brooklin is training to be a Veterinary Technician in the Huntsville, Alabama area, as she loves taking care of dogs and cats.

In addition to being a professional model, Brooklin is also a huge nerd and is a correspondent for Geek Out Huntsville, covering events and reviewing restaurants.

There was an error retrieving images from Instagram. An attempt will be remade in a few minutes.